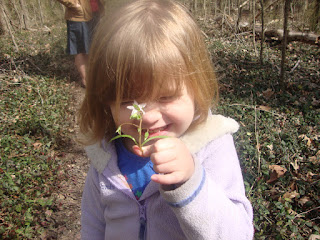 I know that the Pagans of the world will beat me up for saying this, but Spring is here, Equinox or no Equinox. The weather is warm, the grass is green, and trees and bushes are blossoming everywhere. It is glorious.

And I'm curled up in the fetal position, consuming every allergy product known to man.

But that will not stifle my love for this season - my favorite by a landslide.

I spent twelve years in New York City, and every year around March, I could be heard whining and moaning and, as is said in that fair city, kveching about the sheer LACK of anything resembling a real Spring. Sure, there are flowering trees, many of which are located in the picturesque neighborhood known as Park Slope, Brooklyn, where we used to live. Yes, there is a short patch of temperate weather between the frozen winter and the sweltering summer. And yes, the minute the manicured toenails and arms were bared, men and women both resembled their animal cousins in the wild, eyeing each other ravenously to check for compatibility. But, New Yorkers, I must tell you that this is not Spring.

Spring is daffodils poking up at the beginning of March (which is why they're known as "March flowers" in these parts). Spring is day after day after day of weather where you need a sweater in the morning, short sleeves in the afternoon, and a sweater again in the evening. Spring is that hail storm that manifests out of nowhere and is gone in twenty minutes. Spring is cowering in your basement, at least a couple of times each season, praying that the tornado won't come near you. Spring is sitting on a porch swing, singing a favorite song, and stopping whenever someone walks by. Spring is lying in the grass and watching clouds transform before your eyes. Spring is running into your friends at the local farmer's market. Spring is deciding how you want to spend your Derby Day. Spring is knowing you can actually get comfortable and enjoy this season, without that dread that it could disappear at any moment.

I'm home again. There's a lot I miss about New York. Friends, first and foremost; brownstones; crazy characters roaming the streets and subways; the knowledge that this is New York, and nothing can ever compare.

But I am so grateful to be back in Kentucky for the Spring. And though my eyes may water, my nose may run, and I might be hacking up some strange-looking things right now, I'm so happy to be home!
Posted by Randi Skaggs at 5:04 PM No comments:

When you are an avid, AVID fan of something, and then you get to be a part of that something, that's just about the best moment in the world.

I've been in love with the Moth Storytelling Series since I heard about it during my younger days in New York City. I love telling stories, I love hearing stories, I love stories. I'd battle the crowds at Southpaw in Brooklyn or Housing Works in Manhattan to throw my name in the hat, hope, pray, calm my racing heart, and either tell a story or not. I'm not much of a gambler (having an illegal bookie for a dad will knock that urge right out of you), but this is one chance I loved to take again and again and again.

And for all the many times I didn't get to tell a story that I'd spent a week slaving over, I still had the time of my life, hearing about the varied human experiences of my would-be competitors. Funny, heart-breaking, unexpected, boring, bizarre, melancholy, self-absorbed, self-deprecating stories that make you feel connected to strangers in fairly intimate ways.

When I heard the Moth was coming to Louisville, it felt like kismet. Moving here was not an easy decision. New York City has so much to offer, there really is no competition for it, and although I put on a brave and convincing face for Dave, I often found myself wondering of we made the right move. As ridiculous as I think it is to expect God to intervene in things like passed footballs, A's on exams, or favorite storytelling series coming to your city of residence, this simply felt like A SIGN that we were in the right place.

I performed at the first slam in Louisville, telling about a horrific French boss I had during my freshman year in the Big Apple, and felt simply thrilled. I didn't win, I didn't care, I was happy the Moth was here.

And that night in December, nine names had been called, none of them mine. And damn it! I had a good story - a story I was proud of! I whispered to Dave, "The minute the last storyteller is done I want to get out of here and beat the traffic." It's kind of a faux pas to leave before the winner is announced, and you're supposed to go up and say the first line of your story if your name isn't chosen, sort of like a teaser - this is what you WOULD have heard, had my name been called! I just couldn't face that; I was almost in tears.

Then they called my name - LAST - and I told my story. It was the most relaxed I'd ever been, because I was certain I wasn't going to get to go. As I told the story, I heard it, too, and some long-bottled emotions from my childhood resurfaced. I don't let myself think about those days too much, in fact a lot of my childhood is simply gone - forgotten - but in front of those hundreds of people I let myself feel the utter shock and sadness of an eight-year-old who realizes how scary and unpredictable the world can be. I let myself go somewhere I don't go, even when I'm alone.

And when I won, it was the cherry on the cake. And I let myself feel that too - that happiness - and it washed over me and invigorated me. I've learned in my 36 years on this planet to revel in these moments, these moments that are few and far between, and let them fill you up and prepare you for those times that drain you.

So, without further ado, if you want to hear something I'm pretty darn proud of, just click here.

Oh, and P.S., I just saw there's a picture of me on the main page (the first link on the blog). Keeping with that spirit of focusing on the positive, I will revel in how cool it is that my picture is on the Moth page and not the fact that I have a frigging double chin in the picture!
Posted by Randi Skaggs at 5:17 PM 4 comments: 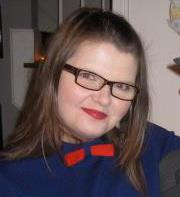